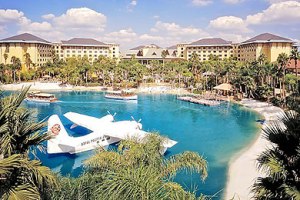 In a previous post I talked about my families high expectations of theme parks, which extends to the hotels on park property. The Royal Pacific puts on a good show in the lobby, we were greeted by several very enthusiastic valets and bellmen all wanting to help with our bags and put a lei of fake flowers around our necks. However after and efficient check in we were very disappointed with our room.   I will not say the room was dirty, but it was evident that the housekeeper had just not been paying attention. There were shredded tissues on the floor, in the bathroom the sink drain was inoperable, and the door handle to the toilet and shower was so loose I am amazed it did not pull off in my hand. Of course when I informed the front desk, they wanted to move us, but as we were in a room near other members of the family, it would have really impacted our vacation. While we were at dinner, they did fix the sink and the door. At that point, you would think they would have doubled checked the rest of the room to make sure it was perfect, but they did not. The next morning I went to make coffee and the coffee maker did not work. The final straw was asking for additional towels since we had a family of 5 in the room and only enough towels for 4 people, they were never delivered.

The other amenities at the resort are good. The pool is big and has a water play area with water cannons and water drops to keep kids entertained, but no slides. They show a movie in the pool area several nights a week. The spa pool is really too small for the crowds at this property. We were there in mid October and it was standing room only, I can only imagine what it is like in high season.

The breakfast buffet we had on our last morning at Royal Pacific was a good experience. The service in the restaurant great, the food was good on the buffet and the omelets to order are really well done.

While Lowes Royal Pacific Resort is very convenient for getting into and out of the Universal Studios Parks and you get early entrance into the Wizzarding World of Harry Potter, and “free” Universal Express (their version of a FastPass).   I cannot say I would recommend staying here. With rooms starting at $259.00 a night you just should be able to have high expectations and have them met.