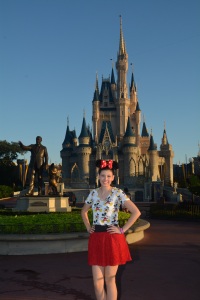 The Magic Kingdom at Walt Disney World “The Happiest Place on Earth”. Walt Disney created a place where he children and their parents could have fun together and everyone enjoy themselves. I wonder what Walt would think of it today? I have read many about Walt and his style of leadership and I think there is a lot we can learn from him and his way of doing things.

On this trip I saw several little things in the magic Kingdom I am not sure Walt would approve of. They really are small things, like the opossums missing and the earth quake not working on Big Thunder Mountain Railroad. I really do not think Walt would like the fact that parts of the story, were missing or not working.

The new expansion of Fantasy land is nothing short of remarkable, the attention to details and the setting Disney has created are spectacular. From the tower Rapunzel lived in to the expansion of Dumbo the Flying Elephants is so well done. My only complaint is at night, granted it is to keep the theme alive, but it is kind of dark for me.

All of my old favorites are still there of course, The Jungle Cruise, Tomorrow Land Speedway, Pirates of the Caribbean. The Jungle Cruise, still the attraction with the best worst one liners in the park and this time I think it might have been even more fun for me as two of my three children now get some of the jokes. The refurbishment of Space Mountain is really good. This is the first time I have been since it was completed. The new interactive elements in the cue really make the wait easier. Speaking of interactive cues, the Seven Dwarfs Mine Train cue is really great. All of the interactive stations make that line seem to go faster. The coaster that is the Mine Train is pretty good. For a thrill rating I would say it is between the Barnstormer and the Primeval Whirl in Animal Kingdom. It never seems to be high off the ground, however, you do get some air time over the hills.

I did manage to do something on this trip to the Magic Kingdom that I have never done before, I finally got to ride the Astro Orbiter. AS funny as it sounds, at 47 years old and after 10 trips to the magic Kingdom this was my first time on that attraction. I remember seeing it the other times, back when it was dressed up like a Saturn V, then in it futuristic design that it has now. I am very excited that Disney left an small salute to NASA and the Apollo program by leaving the gantry that the elevators are in that take you up to the attraction painted International Orange, just like the gantry towers were on launch pads 39A and B at the Kennedy Space Center.